Tomorrow is the summer incarnation of the biannual Wonder Festival hobby convention. It will be the first since the earthquake and tsunami that devastated Japan last March, and initially there were fears that the disarray would prohibit the event planning committee at Kaiyodo from processing amateur sculptors’ requests to sell copyrighted material under the standard one day limited license system the event typically uses. However, companies such as Goodsmile and individual copyright holders stepped into the breach and acted to facilitate permissions for garage kit applicants, so the vast majority were able to go forward as planned.

The event will take place in the Makuhari Messe exhibition center in Tokyo on Sunday July 24th from 10:00am to 5:00pm. Purchase of a 2,000 yen guidebook containing information on the dealers and exhibitors present at the event is required for admission. A first for this time is the establishment of a “Direct Pass” in addition to the guidebook, where for an additional 3,000 yen you can cut to the front of the line and enter before regular attendees. This was put into place, according to Kaiyodo, to combat the mentality of camping out the night before and mitigate the danger posed by mad dashes from the first train of the morning and inside the exhibit hall.

Several dozen figure and hobby goods manufacturers will have display space in the industry booth section of the event, as usual, and hundreds of amateur hobbyists and garage kit producers will also have tables set up throughout the hall. Wonder Festival is also noted as one of the largest events that allows cosplay that includes large props such as replica weapons and elaborate bulky suits, and tends to attract more SF and mecha cosplay than Comiket because of this.

Looking ahead to the event tomorrow, several exhibitors have posted previews of what they’ll have on sale or on display. Some of the ones I’ve come across that seem particularly awesome are below: 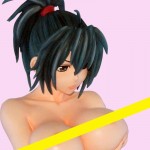 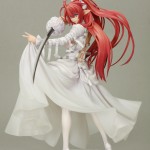 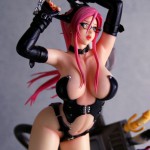 The first is a 1/4.5 scale resin kit of Manyuu Chibusa from the currently running Manyuu Hikenchou anime, produced by maker A Plus. A Plus is relatively new to the scene, having made an early impression with its incredibly large PVC figures including an “ita-oki” line that riffs on the gaudy display of itasha anime-skinned cars. Odds that this and the accompanying 1/2.5 scale Kazami Mizuho from Onegai Teacher will come out in PVC are thus pretty good.

Next is wonder of wonders, a new figure of Jingai Makyou’s Ignis from Orchid Seed! Ignis of the Endless Winter is a stunning recreation of her avenging angel/wedding dress form from the end of the game, and is another masterwork from Orchid veteran sculptor Ishiyama Satoshi. It’s listed as an event only resin kit, but Orchid’s track record of limited resins preceding finished mass-produced kits means that we can be sure to see this out in PVC likely within the next year.

The third thing that caught my eye is the new figure announced from maker Real Art Project, Jo-ou-sama no Kutsujoku: Mioko. Preorders started this week for the figure (Hobby Search), and while this very new brand’s first foray did little to impress (despite having Izayoi Seishin as source material), this design from artist Shinobu (詩乃譜) has a lot to recommend it. The price makes it a much harder sell, but it should be pretty to look at on display in the event hall.

Other points of interest leading up to the event tomorrow:

The forecast for Tokyo tomorrow is partly cloudy with a high of 30 degrees and no chance of rain, so should be a decent event day! Will have more as additional info comes to light, and as Wonder Festival gets under way in the morning (Twitter will be a-buzzing).